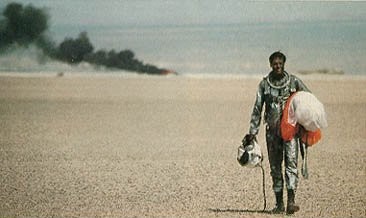 I screened 'The Right Stuff' again last night and it confirmed for me its place as an American classic. It's a superior juggling act of a story that is told over years - from the 1940's test piloting and the breaking of the sound barrier to the 1960's Mercury missions where the pilots become Astronauts and orbit the earth. At three hours plus, the film is engaging in every step with a great balance of character, history and technology. It is the focus on the characters that makes it so memorable. It's even more impressive when you consider that you're forty plus minutes into the film before most of the main characters appear.

The beginning of the film concerns itself with Chuck Yeager and the constant progression of air technology. Yeager becomes the first man to break the sound barrier and, for a brief time, is 'the fastest man on earth'. For a brief time. The focus of the film shifts when the Russians unexpectedly launch Sputnick. America needs to get into the space race and at this point the film leaves Chuck Yeager behind (he doesn't try out to become an Astronaut) and we meet the seven would be astronauts John Glenn (Ed Harris), Gordon Cooper (Dennis Quiad), Alan Shepard (Scott Glenn) as well as the four others. The film follows through each of the missions as well as Chuck Yeagers famous crash involving a F 104 Starfighter. The film says that Yeager didn't have permission to take the Starfighter but Yeager says that he did, he said that he didn't have permission to try to break the altitude record set by the Russians. Regardless, Yeager lost control of the Starfighter and it crashed to the ground.

In terms of direction, Philip Kaufman does a great job of working drama, action, comedy and realism. There are many playful moments including one where Alan Shepard is kept waiting for hours on the launch pad. He makes his need to urinate known. The scientists realize they hadn't thought of that as the flight was only supposed to be for 15 minutes and they fear that if he goes in his suit he'll short something out. Kaufman then has a little fun with the moment as he presents a liquid montage - people pouring coffee, bubbles at the water cooler, engineers drinking water etc. It finally comes to a head when Shepard is finally given permission to soil himself. Other directors may have made nothing of this event but Kaufman takes the opportunity to have some fun. It's with this kind of ease that he finds his way through the story.

It's funny how this film hasn't really be seen as the classic that it is. I don't know too many people who have seen it so I think it's appropriate that I recommend it here. Don't be scared of the three hour commitment as it is one of the best three hours you'll spend in the dark.

Watch for a couple of scenes that seem to have inspired Robert Zemekis' films Forrest Gump and Contact.
Posted by Mark at 11:23 AM

So glad to see you sharing your insights. I'll be an avid (or FCP) reader.

I direct you to The Outlaw Josey Wales. Clint kicked Kaufman off of it, but it stands after Unforgiven as Eastwood's best direction of a western.I see Kaufman's hand in the structure of the script. It has the mythic quality of The Searchers to its unrelenting quest.

But you probably already know this.

There are all sorts of funny things about Kaufman. He is also credited for story on Raiders of the Lost Ark. I also read that William Goldman was the original writer on The Right Stuff and left the project because Kaufman wanted to include Chuck Yeager's story in the picture (I'm sure there were other reasons too - they didn't see the film the same way). I wonder how much of Goldman's script is in the film?