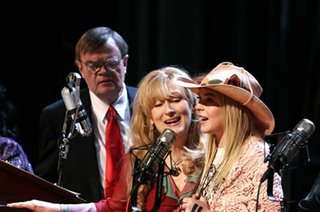 I thought I'd post a little note about Robert Altman's 'A Prairie Home Companion'. I've been a fan of the radio show the film is based on since I heard it on JazzFm in Toronto about 6 years ago. It's a Radio Variety show that features tidbits of scetches, local music (not always Country), and Garrison Keillor's evocative and humourous Lake Woebegon monologues. The film is a whimsical imagining of the backstage happenings on the show's last performance. The theatre's been sold and the purchasing corporation is trading in the Radio show for a more profitable parking lot. The film features Keillor and some of the regulars on the actual Radio show and adds in some fictional characters to flesh it out.

What's great about the film, outside of Keillor's dry and quirky script, is Altmans fluid direction. Like fellow great American filmmakers Orson Welles and Woody Allen, Altman allows the dialogue to flow, allows actors to step on each other's lines and allows for room to breath in the scenes. Film is about cutting, yes. It is also about staging and blocking. Often the limitations of the microphone get in the way of letting the actors 'play' the scene. It doesn't have to be a staccato cutting of lines. To let a scene play isn't to make it less cinematic. Watch Woody Allen's Manhattan or Annie Hall (or any other for that matter) as he lets the actors move through the scene allowing for greater freedom for performance. Welles, who was well known for his filmic bravado, would also make room for the actors. His later work became much more kinetic in terms of cutting but his use of sound and dialogue evokes the stage where people talk over one another. A Prairie Home Companion stands out in the current crop of films and reminds us that there still are unique voices in film. It's inspiring.
Posted by Mark at 12:17 AM 1 comment: 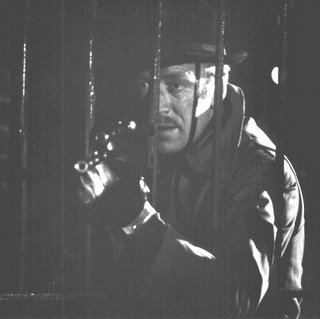 I watched 'Three Days of Condor' the other night. If you haven't seen it, it's a 1970's thriller starring Robert Redford and Faye Dunaway and directed by Sydney Pollack. The film has renewed relevance as the plot revolves around a big oil conspiracy. Redford works as an academic for the CIA and stumbles onto an internal conspiracy without knowing it. The only weakness in the film, and this may just be a matter of taste, is the jazz score. I think it's fitting that film music has a relationship to opera as opera is full of emotion be it melodrama or not. Jazz doesn't work on the same level. This isn't to say that films shouldn't have a jazz score as many have worked wonderfully. It just didn't seem to fit the landscape of Three Days of Condor.

After Watergate there were a few great political thrillers including The Parallax View, Three Days of Condor and All the Presidents Men. In terms of tone you could add Marathon Man to the mix although it veers off the politics.

I thought that Syriana, also in that vein of the previous political thrillers, was one of the best films last year. It would have been my choice of best picture although it wasn't even nominated. It was an intelligent film that demanded the audience's attention and another example of George Clooney's and Matt Damon's abilities to attach themselves to interesting projects.

On the note of thrillers (outside of the political kind) I would have to recommend 'Ripley's Game' starring John Malkovich. I was a big fan of Anthony Minghella's 'Talented Mr. Ripley' and had avoided Ripley's Game after it failed to get a theatrical release (assuming it to be a dud). Roger Ebert has been singing it's praises so I went and rented it and was delighted. It has a different tone than Minghella's film but is just as engaging.

I would also recommend Alan Pakula's 'Presumed Innocent' with Harrison Ford. I rediscovered this film last year and enjoy it immensely. Pakula, who directed the Parallax View and All the Presidents Men, was a lean and well crafted filmmaker. Presumed Innocent works so well on every level.
Posted by Mark at 8:58 AM No comments: 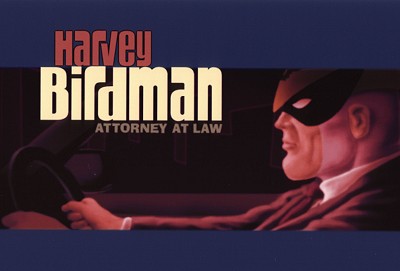 I saw Harvey Birdman at the Ottawa Animation Festival last year and really enjoyed it. I saw the Volume 1 dvd out and picked it up and now I am most definately a fan. The show has such an absurd sense of humour. Good fun.
Posted by Mark at 10:09 PM No comments: