According to Wikipedia here are the twenty top grossing films of the decade...

Kottke.org noticed that of these films only 'Finding Nemo' was based on an original screenplay. All others were based on existing material - adaptations, toys or sequels/prequels. Now this isn't new - 'Gone with the Wind' was based on a book as was 'To Kill a Mockingbird' and 'The Godfather'. 'Casablanca' was based on the play "Everybody Comes to Rick's". 'Rear Window' was based on the short story "It Had to Be Murder". Adaptation is not a new phenonenon. There is a lot to like in that top twenty list. Yes, they are popcorn movies that appeal to the masses - that's the idea. That is why they are the 'top grossing' and not the 'best films of the decade list'.

The only problem with this list is that it solidifies the Hollywood bean counter's idea that these are the only films to make. It creates homogeneous film industry that spews out the same films over and over.

I think the solution to the problem is to let them keep doing it. Why? Because they are going to exhaust their catalogue of sequels and book rights. The well will run dry and they will have to start to look for new material. I think we are coming to a time that reflects the end of the 1960's where the studios lost touch with the audience and faltered. They fell apart and the pieces were picked up in one of the most daring and original decades of film.

Independent film has waned over the last few years and one look at Apple's Quicktime Trailers site shows an industry in confusion and flux. The future is uncertain, that is for certain. People love movies, that is also for certain. It's also a historical fact that Hollywood has been doing adaptations and sequels for a long long time. Andy Hardy anyone? Sixteen movies (granted before televison). Sergio Leone's 'Dollar Trilogy' was an unofficial remake of Kurosawa's Yojimbo.

It is not a new phenomenon, nor is it a bad thing. Adaptation has given us some great films.

As for original films... What do consider the greatest? 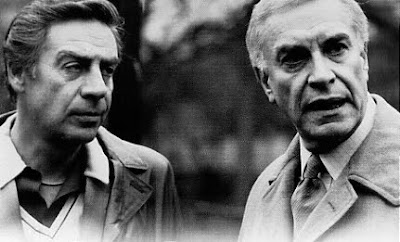 Rob sent me this terrific interview with Martin Landau...

I really liked the part of the interview when he was asked about how he's been directed by such diverse and talented directors. He said "I haven't been directed, literally, in 30 years by anybody. I haven't been given a direction. I come in with stuff and I figure if they don't like it they'll tell me. They don't tell me. I hit my marks, I say the words, and I go home."

The great direction is in the casting. I've often said that good directing is letting good people do their jobs. We collaborate with people that share our vision.

A few years ago I did an animated show that revolved around music. I gave virtually no direction to the composer, the writer or the designer/animation director. They knew what they were doing and they were great at what they did - much better than I was at their job. To interfere and 'direct' them didn't serve the show. They 'got it' and I was constantly amused and surprised by what they came up with. They got the idea and they ran with it. The show benefited by this collaboration. I didn't need to make it 'mine'...

If it starts going off the rails then the director needs to put it back on. They are, as one great filmmaker put it, the Circus Master...

Hire and cast great people. They will make the film better. Leave your ego at the door. It's all about the film.

Crimes and Misdemeanors. Ed Wood. North by Northwest. Tucker: The Man and His Dream.

If you haven't yet, see them all. And then go for some more.