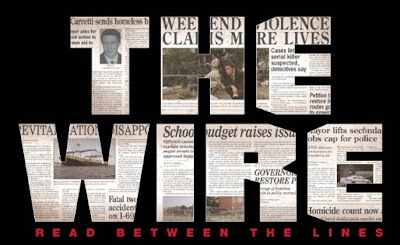 As anyone might figure out reading this blog, I like to go at my own pace and rarely comment on anything new or trendy. It's not conscious, I just tend to get to things when I get to them.

I ordered the Wire for Sylvia's birthday this year. I got her the box set with all five seasons. We put the first one in and then proceeded to wolf them down at record pace finishing six or more years of work in a short month. I think my birthday might be covered as well...

Wow. On every level. Wow.

For those who don't know it, 'The Wire' is about the relationship of the Baltimore Police force and it's effort to control the drug trade in the city. It's also about the 'criminals' and their struggles, good and bad. What is great about the series is that it's really about Baltimore and the 'game' that is played on every level. 'The game' is the corruption from the corner gangs to the city politics and every season opens a new level of corruption. Season 1 is cops and robbers - police and drug dealers. Season 2 goes to the docks and the politics of the unions and the desperation and corruption of workers. Season three delves into the politics of statistics and the police force. Season 4 takes you to the schools and shows the failure of the educational system. Season 5 brings in the media and it's need for 'a good story'. This is just the surface - there's a lot more to it.

On top of the great writing and the thematic depth, I was totally impressed with the look and style of the show. It was shot with the care and detail of feature films. Employing such directors as Agnieszka Holland, the show is carefully crafted and steers from the trappings of shaky cameras and quick editing. The soundtrack rarely included music other than what is playing in the actual scene. It's sparse and realistic and totally engaging.

I can't praise the show enough. It's been described as the closest thing to a novel as we've seen on television. I think that is a good description. It rates up there with Kieslowki's 'Decalog' as one of the great achievements of television. It's a stunning work and I absolutely recommend it.
Posted by Mark at 10:02 PM 5 comments:

We had a spectacular electrical storm last night.

Take that Industrial Light and Magic.
Posted by Mark at 5:10 PM 1 comment: