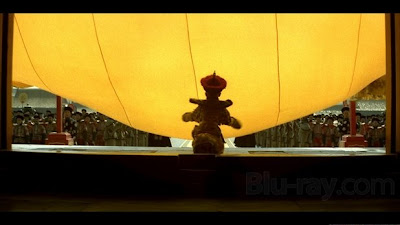 I've converted to Blu-ray. Not as a religion mind you, but as the format of choice. While DVD's look wonderful on my television, Blu-ray looks quite beautiful and sublime. Like others of my ilk, I am determined to add new discs to my collection and not replace the old ones... wishful thinking.

A few thoughts off the top...

Blade Runner - looks spectacular. The downside... the clarity allows the viewer to 'spot the matte painting'. Yes, the wizard emerges from the curtain occasionally to show itself. Still. Spectacular.

The Shining - that lens is really something else. Thanks to Rob for putting me onto the 'making of'. Intimate and fascinating. I loved the footage of the composer, Wendy Carlos (she invented an instrument for the film!).

Body Heat - As my friend Ike said - What a debut!

Two films that I hadn't seen and have always wanted to see, 'The Last Emperor' and 'Reds'. I've always wanted to see them but refused to see them on VHS or television as I'm such a big fan of Vittorio Storaro. Storaro deserves blu-ray in the least, projection at the most. I've often criticized the '80's cinema as being commercial and benign yet it's easy to miss some great films being made under the radar. Both of these films have an epic sweep yet both of these films are small and intimate. It isn't something that you would attribute to the '80's at all. The 'masters' were all having a hard time finding financing for personal films as Hollywood made money hand over fist on commercial enterprises. I've wanted to write more on this topic but to be honest haven't quite got my head around it. I watched Coppola's 'Rumble Fish' the other night and was enthralled. It's so daring and original and was received so poorly. The decade seemed to be a cleansing of the 70's director-driven films but often feels like a river of gold where you have to shake the pan to find the nuggets.

Not that I would deride some of the terrific commercial films of the decade. I do love many of them. It just seems like we need to keep a healthy mixture. It is an issue today as the big companies are leaving their Miramax killing divisions behind and focusing again on huge commercial films. 3D, they say, will save the world! Again. The 1950's had the same idea with the advent of television. Spectacle! That's what they want.

There have been plenty of great films made in this decade and we can only hope that the accountants don't give it all away. I do love my blu-ray but I would like to keep watching films that are worthy of the awe.
Posted by Mark at 4:03 PM 2 comments: