The most gloriously nerdy thing I've ever seen... 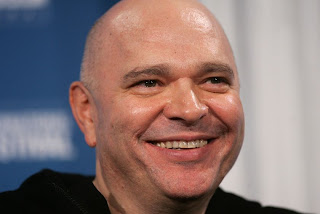 What more can I say about it? It's death and we're all heading for its inevitable grasp. What we can do is find comfort in those extraordinary moments of beauty in life and in art. I'm thankful that Anthony Minghella shared so many great moments with us.
Posted by Mark at 12:53 PM 3 comments:

The following is an excerpt from an Andre Bazin interview with Orson Welles in Cahiers du Cinema:

What is your position vis-à-vis large screen or colour? Do you think that it is better to orient oneself towards the small screen and the poverty of television?

I am convinced that when the screen is big enough, as in the case of Cinemiracle or Cinerama, it is also a poverty, and I love it: I would love to do a film with one of these two processes. But between the Cinemiracle and the normal screen, there is nothing that interests me. The poverty of television is a marvellous thing. The big classical film is of course bad on the small screen, because television is the enemy of classic cinematographic values, but not of cinema. It is a marvellous form, where the spectator is only a metre and half away from the screen, but it is not a dramatic form, it is a narrative form, so much so that television is the ideal means of expression for the storyteller. And the gigantic screen is also a marvellous form because like television it is a limitation, and one cannot hope to reach poetry only in composing with limitations, it’s clear. I also like television a lot because it gives me my only chance to work; I don’t know what I would say about it if I also had the opportunity to make films. But when you work for something, you must be enthusiastic!

Working in television, does that imply a particular point of view in communication?

And also a certain richness, not a plastic richness but a richness of ideas. In television, you can say ten times more in ten times less time, because you are not addressing only two or three persons. And, above all, you are speaking to the ear. For the first time, in television, the cinema takes on a real value, finds its real function, because it talks, because the most important is what is said and not what is shown. Words are thus no longer the enemies of the film: the film only helps the words, because television is in fact only illustrated radio.

Television would be a kind of way of bringing the cinema back to your beginnings in the radio?

Above all a means of satisfying my fondness for telling stories, like the Arab storytellers on the marketplace. For my part, I love that: I will never grow tired of hearing stories told; you know I make the mistake of thinking that everyone has the same enthusiasm! I prefer stories to tragedies, to theatrical plays, to novels: it is an important characteristic of my taste. I read with a great effort the “great” novels: I love stories.

Isn’t the public less attentive to television than to cinema?

More attentive, because it listens rather than looks. Television viewers listen or don’t listen, but no matter how little they listen they are more attentive than in the cinema, because the brain is more engaged by hearing than by seeing. To listen, you need to think; looking is a sensory experience, more beautiful and more poetic, but where attention plays a smaller part.

For you, television is thus a synthesis between the cinema and the radio?

I am always looking for synthesis: it is a work that fascinates me, because I must be sincere towards what I am, and I am only an experimenter; experimenting is the only thing that fills me with enthusiasm. I am not interested in works of art, in posterity, in fame, only in the pleasure of experimentation itself: it is the only sphere where I feel really honest and sincere. I have no devotion for what I’ve done: it is really without value in my opinion. I am profoundly cynical towards my work and towards the majority of works I see in the world: but I am not cynical towards the act of working on a material. It is difficult to make this understood. We who declare ourselves experimenters have inherited an old tradition: some among us have been the greatest artists, but we have never made muses our mistresses. For example, Leonardo liked to think of himself as a scholar who painted and not as a painter who could have been a scholar. It’s not that I want to compare myself to Leonardo but that I want to explain that there is a long lineage of people who appreciate their works according to a different hierarchy of values, almost moral values. I am not thus in ecstasy in front of art: I am in ecstasy before the human necessity, which implies all that we do with our hands, our senses, etc. … Our work once finished has not so much importance in my opinion as that of the most æsthetes: it is the act that interests me, not the result, and I am taken with the result only when there is the smell of human sweat, or a thought.
Posted by Mark at 9:08 AM No comments:

The Legion of Decency

There is a great quote on the back of David Mamet's critical book about the nature of the film business, 'Bambi vs Godzilla'.

“David Mamet is supremely talented. He is a gifted writer and observer of society and its characters. I’m sure he will be able to find work somewhere, somehow, just no longer in the movie business.”
–Steve Martin

Jim Henshaw is continuing his 'airing of the grievances' over at The Legion of Decency.

Last year I was working at a company when one of the fellows I was working near got up, went to the head of his department and quit. As I watched him walk out I asked his friend what had just happened. He told me that the guy had had enough and was going to become an electrician! Just like that. He quit the business in a single moment of clarity. Jim's blog might make a few more electricians...
Posted by Mark at 2:38 PM 2 comments:

"I believe the common denominator of the universe is not harmony but chaos, hostility and murder".

My friend Pete Pelisek and I have an admiration for the filmmaker Werner Herzog. This is a BBC interview where Herzog is shot by a sniper with an air rifle. Make sure to watch the entire clip. He may have added the word 'ironic' to the quote above.

And this tidbit from IMDB:

"Joaquin Phoenix was in a car accident on a winding canyon road that flipped his car over. Shaken and confused, Phoenix heard a tapping on his window and a voice say, "Just relax." Unable to see the man, Phoenix replied, "I'm fine. I am relaxed." Then managed to see that the man was Werner Herzog, and Herzog replied, "No, you're not." After helping Phoenix out of the wreckage, Herzog phoned for an ambulance and vanished."
Posted by Mark at 4:07 PM No comments: