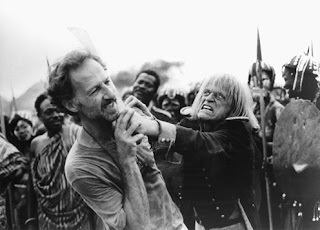 On the importance of film editing

I was having a conversation with a friend about the importance of a good editor in film and he seemed to think, in his experience, picture editors were merely button pushers - technicians who ran the equipment. I must admit being slightly baffled by the conversation, particularly because I was talking to a fellow director!

For me, the writing team that makes up a film is the writer (of course!), the director and the editor. Each person contributes to the story in very concrete ways. In the vaguest sense, the writer creates the scenario and dialogue and explores the themes of the piece. The director shapes the visual part of the story telling and creates the tone and style as well as informing the performances. It's the editors job to take all that has been designed and shot and shape it into the finished piece. The editor becomes, as the famous editor Walter Murch puts it, the representative for the audience. The editor isn't concerned with the writer or directors initial intentions, they are set to the task of making what was shot and gathered work.

"the central occupation of the film editor, is to put himself/herself in place of the audience. What is the audience going to be thinking at any particular moment? Where are they going to be looking? What do you want them to think about? What do they need to think about? And, of course, what do you want them to feel? If you keep this in mind (and it's the preoccupation of every magician), then you are a kind of magician. Not in the supernatural sense, just an everyday, working magician."

“Orson Welles once said in an interview in Cahier du Cinéma: For my style, for my vision of the cinema, editing is not simply one aspect: it’s the aspect. The notion of directing a film is the invention of critics like you [Cahier du Cinéma]. It isn’t an art, or at best it’s an art only one minute a day. That minute is terribly crucial, but it occurs very rarely. The only time one is able to exercise control over the film is in the editing. The images themselves are not sufficient. They’re very important, but they’re only images. What’s essential is the duration of each image and that which follows each image: the whole eloquence of cinema is that it’s achieved in the editing room.”

Anyone who has ever made a film understands that the moment you arrive at a location you are at the mercy of time and circumstance. Everything on the face of the earth seems to come together and conspire against you. Filmmakers are great rationalizers and when everything starts to go wrong, you rationalize it into something positive. It's in the editing room that you start the film over again and throw out all initial intentions and replace them with the reality of what you shot. This isn't to say that the film is replaced, rather, it represents another opportunity to react to the story as it exists and to reshape it. Things you thought would work well fell flat while things you struggled with come off with smashing success.

According to the film journalist Peter Biskind, this is where the film company Miramax set itself apart from other studios. In his his terrific book "Down and Dirty Pictures", Biskind says that while the other studios would put films through development hell, working and reworking the scripts, Miramax was very quick to green light a project and put it into production. Hell came in post production as they would work and rework the edit until they got the film they wanted. Although this process was incredibly tough for the filmmakers, Miramax showed a unique understanding of the importance of editing, an insight that provided them with their unparalleled success.

Filmmaking is a collaborative art and the process is one where the film gets written many times before you end up with a finished print. There is give and take between the writer, the director and editor and while the director gets the final say, the editor is integral to the process and a good editor is worth their weight in gold. They are that fresh set of eyes that helps to write the rhythm and tone (and sometimes structure) of the picture.

For a terrific example of how much editing impacts a film, rent the Criterion Collection's version of Terry Gilliam's "Brazil". "Brazil" was a troubled production and the studio, under Sid Sheinberg, recut the film into a "Love Conquers All" version (eventually agreeing to releasing Gilliam's version). The Criterion Collection inludes both versions of the movie so you can see how Sheinberg's cut differs immensely from Gilliam's despite using all of the same footage! It's a little editing class in a box.
Posted by Mark at 4:21 PM 3 comments: