How the Times Have Changed 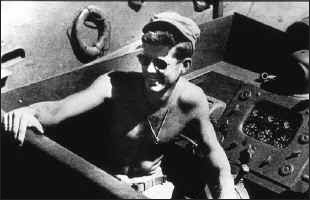 I was watching American Movie Classics today and happened upon 'PT109', a dramatization of John F Kennedy's wartime experience. To be honest, I wasn't much interested in watching it but was struck by the idea of how times have changed. Could you imagine a dramatization of George W's skipping out on the National Guard?! His film might be somewhere on the level of 'Revenge of the Nerds' or 'Animal House'. Had Kerry won the election maybe we would have another PT109 or 'Mutiny on the Bounty'. Maybe even a dramatization of Al Gore creating the internet...

The Emperor has no clothes.
Posted by Mark at 6:17 PM 1 comment: 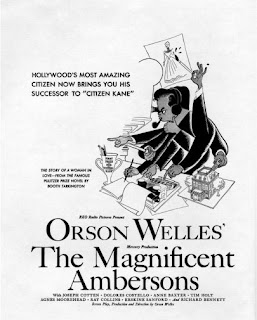 I was contemplating some missing films on DVD. Previously it was 'The Conformist' which has since made its appearance. Today I was thinking of the 'The Magnificent Ambersons' and its glaring absence. If ever a film deserved a spectacular super duper special edition, its Welles somewhat forgotten, abridged masterpiece.

I just finished reading Joe Eszterhas' memoir 'Hollywood Animal' and found it to be an extremely surpising, touching and engrossing book. If you don't know him, Eszterhas is famous for being one of the highest paid screenwriters in history and is responsible for such films as Showgirls, Basic Instinct, Jagged Edge, Betrayed, Flashdance, Jade (etc.). His films have had a huge impact at the box office despite being lambasted by critics as 'everything that is wrong with Hollywood'.

I can't chime in on the criticism here as I think I've only seen Basic Instinct, Betrayed and Flashdance. I can't chime in on the criticism as I don't remember much about these films. However, 'Hollywood Animal' is refreshing as Eszterhas doesn't sugar coat his life or his work. He frankly recognizes when films didn't work but defends his own place in the process. He defends himself against accusations of misogyny and a lust for violence. He also defends the writers place in the process of making a film. Too often writers are just happy to be invited to party (the production) and too often writers ruin their own work, giving in to the whims of the studios. Eszterhas refused to do unnecessary rewrites and fought to preserve the integrity of his stories. He was willing to kill a project if the studio or director wanted to make changes Eszterhas felt damaged his story.

Whatever you think about his films, you have to admire his courage (or arrogance) in the face of overwhelming pressure. The pressure is this: do what we say or you don't have a career. Anyone who stands up to that possibility warrants a second look and deserves the respect of his peers. In the documentaries for the show Seinfeld, there is a story of Larry David who quit after being given 'notes' by an executive (apparently he quit often). David, like Eszterhas thought it better to walk away then to give in to someones 'stupid' ideas. The writer is hired, like any specialist, to write. The writer should be considered the 'expert' at story. The writer is the one who is trying to balance all the elements of the story and is asked, often without care or thought, to make changes that jeopardizes that delicate balance. Think of the script as a house of cards or a game of Jenga. You place all the elements in their place for the purpose of the drama. You juggle all of the elements of character, dialogue and situation to move towards the unexpected but inevitable conclusion. Then, out of nowhere, changes are requested that pulls a card (or several) out of the house. Suddenly, the cards fall and you end up with a mess. On top of it, you give up your unique voice and obsessions to appease the whims of others (something novelists, playwrights and poets don't have to do).

One thing I admired about Eszterhas is that he rarely worked on assignment and he didn't just pitch an idea. He dreamed up a story, wrote the screenplay and then sold it (for a tidy sum). He was a writer writing. He wasn't a gambler, trying his hand at an idea, but a writer who spent his time writing what he wanted and then worried about selling it afterwards. This is called the 'spec' script and he was advised against it by his agent as it was considered to be amateur. Real writers pitched an idea then wrote a script. Eszterhas liked to write and he made his career on his own terms. Despite what anyone says about his films, he deserves respect for his integrity and need to express his own ideas.

Beyond the business of writers and writing, 'Hollywood Animal' is also a very honest autobiography of a man who lived a dual life. He stayed away from Hollywood and was known as a dedicated family man. However, he admits to giving in to the sins of the rock and roll lifestyle, drinking to excess and cheating on his wife. There is an honesty to this book that is touching. He reflects on his past and seems to be trying to exercise his demons. As one might tell a story of their life in anecdote, Eszterhas seems to use this memoir as a way of understanding himself. It is the work of someone who is not at the end of their days, but one who is trying to move forward with the realization of who they have become.

Highly recommended.
Posted by Mark at 9:13 PM No comments:

Orson Welles, James Stewart and Dean Martin? Why not?