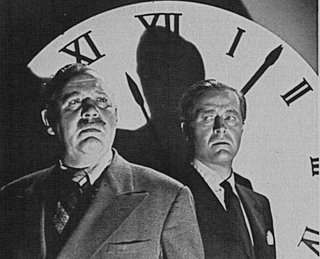 I screened 1987 film 'No Way Out' the other night. It turns out that it is derived from the 1946 book 'The Big Clock', a book that had been adapted for the screen previously in 1948. The film adaptation of the same name starred Ray Milland in a role that would have suited James Stewart just as well. Both films carry the same narrative where the protagonist is framed for murder and in a twist of fate, are responsible for investigating their own apparent crime. It is the kind of material that Alfred Hitchcock loved exploring.

Although both films are similar in plot there is a definite difference in tone. 'No Way Out' is modern in it's portrayal of sexuality. Sexuality was a staple of film noir but it's only hinted at and never explicitly explored. In the modern version it is spread out (forgive the pun) and exploited for full effect. In classic noir the femme fatale is usually pulling the strings but in 'The Big Clock' and 'No Way Out' she is the victim of her desire.

What stands out in 'No Way Out' is the terrible electronic score provided by Maurice Jarre. I was appalled at how bad the score was and had to go look up the other films that Jarre had worked on. What I found was an accomplished list of credits including Peter Wier's terrific film 'Witness' and the spectacular 'Lawrence of Arabia'. The midi soundtrack in 'No Way Out' was simply empty and void of emotion and atmosphere. It's interesting to see how a film like 'No Way Out' could have stood out better in time if only it had a proper film score attached to it. It's not a bad film despite a questionable performance by Sean Young (or questionable direction of Sean Young) and a silly cold war twist ending.

A films soundtrack is so important in the success of the picture that it is interesting when bad examples jump out at you. Think of the 'great' movies and it is very hard to find an example where the score and sound in the film isn't equal to the story and picture. I'm still divided on 'Blade Runner' and the Vangelis electronic soundtrack. Certainly it's better than 'No Way Out' but sometimes I don't mind it and sometimes I dislike it. I imagine I react against these midi scores as they are being used intellectually. Both 'No Way Out' and 'Blade Runner' are futuristic so it's an interesting choice to try to have a futuristic soundtrack. It seems misguided as the music is there to support the emotions of the characters (or counter point them) and there is no emotional resonance in the empty and clinical soundtrack.

If you are interested in film music you should check out the new version of Francis Ford Coppola's 'The Outsiders'. Coppola expanded the edit of the film to better reflect the entire work of the novel. The other thing he did was drop the original music his father had composed for the film and he rescored it using found music of the period. It was an incredible experience sitting and watching this film that simply 'felt' different from the other version. Dropping the melodramatic score improved the film greatly. Again, the original score seemed more of an intellectual exercise, trying to evoke the grandiose tones of Gone With the Wind while it didn't work for the characters and what they were going through.

This site is one of the best I have ever seen, wish I had one like this.
»