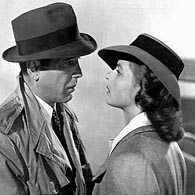 I just had some dinner and turned on the television to see what's on. As usual, there are some slim pickings until I come across VisionTV which is screening 'Casablanca'. I won't ask how the film fits into the programming for that particular station but I'll take whatever stretch they come up with.

Either way, I was busy putting the laundry on and putting away the dishes and was listening to the opening of the film instead of watching it. What struck me was Max Steiner's use of the French National Anthem in the score. The story of the film is that is was meant to be a sort of B picture and was in production at the same time as it was being written. This is usually a recipe for disaster (brings to mind such gems as Cutthroat Island...). The opening of the film is narrated to give the audience the idea of how Casablanca was the last stop for people trying to flee Europe during the second world war. On a limited budget they needed to set up the big story and then set up the dangerous and romantic setting of French Morocco. Steiner in his score is being practical by repeating the French National Anthem several times in order to help set up the location and space of the film. In other words, Steiner is telling part of the story. The economy of the film was such that they couldn't afford to shoot in the real Morocco so they cheat it by using the soundtrack to set the location. Film music is usually used to punctuate emotion and set tone. I find it very interesting that it was being used in such an intellectual way.


Now to Cutthroat Island... It's an interesting film as it is a great example of marketing and film business. I could only imagine that Hollywood would have been convinced that nobody wanted to see a pirate film after Cutthroat Island tanked. It was a bad film but it's not that nobody wants to see a pirate film they just don't want to see a bad pirate film. Pirates of the Caribbean is on the mark of making big money. Why? Because the first film was very well done and although I haven't seen the next one, it seems that it too is very entertaining. How do you market a film first and foremost? Get behind a good film and don't be concerned over whether or not you think there is an audience for it. It's been proven over and over again that marketing studies and demographics mean very little (Forrest Gump anyone?). Has Miramax not taught us anything?
Posted by Mark at 2:10 AM

I like it! Keep up the good work. Thanks for sharing this wonderful site with us.
»