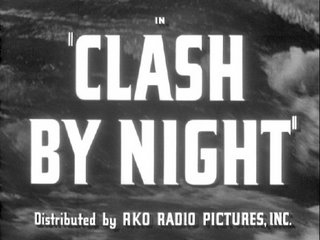 I've been a fan of Film Noir since I saw The Third Man in the early 90's and started to read and watch anything I could get my hands on. Although The Third Man isn't really considered an absulute Film Noir, it is recognized as having some of the qualities of Noir. I won't go in depth about it here but there are many intellectual disagreements over whether Film Noir is a style of film or whether it is an actual genre (or sub genre). Some argue that it was born out of post war America and the movement ended in the late 1950's with Orson Welles' Touch of Evil. Since there is no real definitive answer I won't delve into the middle of the debate as in the end it probably doesn't really matter.

Clash by Night is a Film Noir by the great German director Fritz Lang and stars Barbara Stanwyck, Paul Douglas, Robert Ryan and a young Marilyn Monroe. The story begins with Barabara Stanwyck returning home to Monterey after a failed Marriage. She's a lost soul, a gold digger looking for that elusive thing that will bring her happiness. She moves back in with her brother and ends up being courted by her brothers boss Jerry, played by Paul Douglas. Jerry is a kind man who owns a fishing boat and lives with and takes care of his uncle and father. Stanwyck reluctantly gives in to Jerry hoping that his kindness and security will satisfy her. It doesn't. They have a child together but Mae (Stanwyck) is restless and ends up having an affair with the brash and indignant Earl played by Robert Ryan. He's an exciting but stormy character and he does his best to seduce Mae.

The film doesn't have much actual violence but it is brimming with the idea of violence. The young women are head strong yet vulnerable to the type A male. They are bullied and threatened and they can't help but fall in love. Jerry, the kindest and gentlest of the men, is cuckolded and ridiculed. Film Noir always finds it's way to these primal emotions. It combines sex and violence and watches as the weak stumble and fall from grace. Jerry doesn't deserve any of what he gets but it's not up to him. Stanwyck, like in Billy Wilder's Double Indemnity, is 'rotten' (a word used in both films) - a self serving femme fatale.

In some ways Clash by Night is reminiscent of another terrific Lang film, 'Scarlett Street' starring the great Edward G Robinson. In both films the mature and kind gentlemen are played for fools by the young women. The subtext of these films seem to suggest that young women are to be feared. Women in youth are in their prime and can use their sexuality as a weapon for self gain. Feminists would call this misogyny and a male excuse to keep women's sexuality repressed. I think they have a point. Regardless of the politics both of these films are supreme examples of Lang's ability to infuse his films with raw emotions.

I think I enjoy Noir so much partly because the stories are edgy and lacking of some of the theatrical melodrama that you find in other films of the period. I also like them because they start to stab at themes and ideas that suggest that we are all a little corrupt and given the opportunity, we too could fall from grace.

Of particular historical interest, Clash by Night starts off with documentary footage of Monterey and the fisheries. Lang sets up his story location with real shots of the birds, seals, boats and docks. He combines them with footage of his actors including Marilyn Monroe working in Cannery Row canning fish (even these images couldn't diminish her appeal). We see the waves crash against the coast of Monterey - a great foreshadowing of things to come.
Posted by Mark at 10:23 AM