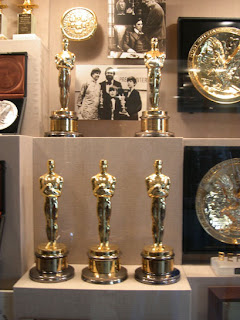 I caught a bit of 'Patton' this morning on AMC. Coppola won his first Oscar in 1970 as one of the writers of 'Patton'. I found this interview excerpt:

What do you think are the most important characteristics for success in your field?

Francis Ford Coppola: Courage, I think, because I don't think there's any artist of any value who doesn't doubt what they're doing. That's what I would say in looking back at my life, at the things that I got in the most trouble for, or that I was fired for.

I wrote the script of Patton. And the script was very controversial when I wrote it, because they thought it was so stylized. It was supposed to be like, sort of, you know, The Longest Day. And my script of Patton was -- I was sort of interested in the reincarnation. And I had this very bizarre opening where he stands up in front of an American flag and gives this speech. Ultimately, I wasn't fired, but I was fired, meaning that when the script was done, they said, "Okay, thank you very much," and they went and hired another writer and that script was forgotten. And I remember very vividly this long, kind of being raked over the coals for this opening scene. My point is that what I've learned is that the stuff that I got in trouble for, the casting for The Godfather or the flag scene in Patton, was the stuff that was remembered, and was considered really the good work.

I took the above picture at the Coppola Winery in Napa California. Coppola once said that he was lucky to have won Oscars when he was young because he knew some filmmakers who, late in their careers, had become obessessed with winning one before they retired or expired. Of course the cynics would say that they are giving them away these days. But that's just the cynics.
Posted by Mark at 9:45 AM

When you were oggling the trophies, Mark, did you notice if any of them were dented or scratched? Didn't he hurl a bunch of them out the window during one of his darker days trying to keep "Apocolypse Now" production afloat? I'll have to go back to Eleanor's "Notes" to check. Just curious.

I got my copy out and scanned it but didn't find the incident.

'Notes' is such a terrific book and Eleanors courage and honesty is so raw. A rare gem.