For all you Coppola fans... well, Jim anyway. 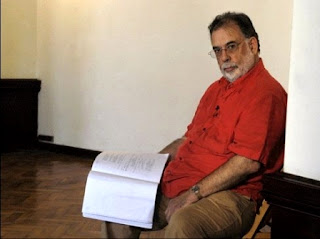 Anyone who knows me knows that I am a big fan of Francis Coppola (even with the Ford in the middle). It's very exciting to see that he has stepped out to make another personal film and to see that he has once again teamed up with the great editor and sound guru Walter Murch. Although Coppola has been unfairly trashed for his work in the 1980's and 90's, no one can deny the spectacular run he had in the 1970's with 'The Godfather', 'The Conversation', 'The Godfather Part II' and 'Apocalypse Now'. Most filmmakers would love to have any one of those films on their resume...

"I've never made a movie anywhere near as good as The Godfather and I don't have ambition to, either. If it happens, it happens."

It's also of some interest to note that he shot this new film in High Definition Video. Coppola has always been on the cutting edge of technology so it will be interesting to see what he does with the relavitively new format.

by Eugene Hernandez
Sony Pictures Classics has acquired North American rights to "Youth Without Youth," the first film in a decade by Francis Ford Coppola. The company is planning a late Fall release this year. Adapted from a novella by Romanian author Mircea Eliade, Coppola wrote, directed and produced the new film, which stars Tim Roth. The actor plays Dominic Matei, described as, "an elderly professor whose mysterious rejuvenation heightens his intelligence and whose apparent immortality makes him a target for the Nazis in this World War II-era parable."

In a statement from his company, American Zoetrope, Coppola described the movie as, "A love story wrapped in a mystery." And he added, "This film was conceived and completed independently. It was made with a small team that worked intensively in Romania for a year and a half. The story revolves around the key themes that I most hope to understand better: time, consciousness, and the dream-like basis of reality."

Continuing he praised Sony Classics as, "the pre-eminent distributor of fine filmmaking," and he explained in the statement, "Following in a tradition begun at the side of Arthur Krim, through the excellence of UA and Orion Classics, Michael Barker and Tom Bernard remain for me the ultimate authority of what I consider true cinema -- ambitious and satisfying personal films that take their place alongside traditions of literature and art."

Executive produced by Anahid Nazarian and Fred Roos, the film was shot by Mihai Malaimare Jr. Walter Murch joined Coppola to edit the film in Romania, where it was shot, with music by Osvaldo Golijov. It was a Euro-treaty co-production of SRG Atelier, Pricel, and BIM Distribuzione, and is presented by American Zoetrope. It also stars Alexandra Maria Lara, Bruno Ganz, Andre M. Hennicke, Marcel Iures, and Alexandra Pirici.

'Youth Without Youth' is what we call a full meal, satisfying in all departments," said Sony Classics' Michael Barker and Tom Bernard. "It is personal, sweeping, and entertaining. It is unlike anything we've seen before. It is the kind of innovative movie we've come to appreciate from new successful independent filmmakers while at the same time possessing a mastery of story, sound, and visuals that you can only get from a Francis Coppola movie. The title says it all."

"We are thrilled to bring such a film to the American audience," Barker and Bernard said, "May Sony Pictures Classics bring the same fresh energy to the release of 'Youth Without Youth' as Francis has in its creation."
Posted by Mark at 11:35 AM

Coppola is so cool, even if he can't get Megalopolois made.

And for no reason except that when I found these I thought of you, here's some cool cinema related links:

A good article on the use of light in film

And a posting at Slashfilm about your most favourite director in the world, Michael Bay, and how he re-used shots from Pearl Harbor in the Transformers

"Finally!! A use for Pearl Harbour!"