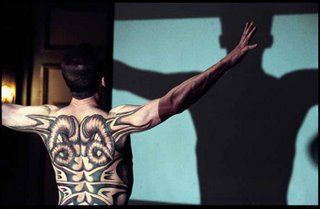 Red Dragon sees the return of the writer Ted Tally and actor Anthony Hopkins who played Hannibal Lector in 'Silence of the Lambs'. These two talents are not enough to elevate this picture to the original.

The first thing that stands out is the miscast of Edward Norton. Norton is a terrific actor but the lead role demanded an older and more experienced FBI agent and Norton looks younger than Jodi Foster did when she played the 'student' in the original. Sometimes you can get away with this reversal but it works against this film. They really needed to get a more mature actor to play the role.

Great films tend to have a great mixture of all elements - they are not made in a vacuum. Casting isn't something that is talked about much but it is something that can push a film into becoming a classic. The original 'Red Dragon' was made by Michael Mann as 'Manhunter'. Lector was played by Brian Cox and he did an admirable job but Hopkins brought the role to an entirely new level. Sure, 'Silence of the Lambs' had some hokey bits but overall the film is a masterpiece of macabre fiction.