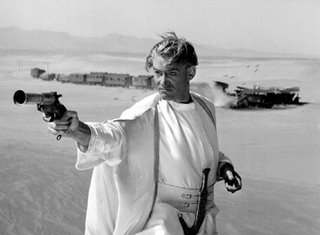 Vince responded to my post about miscasting and proposed the opposite question of some examples of inspired casting.

Peter O'Toole came to mind as the star of David Lean's classic 'Lawrence of Arabia'. O'Toole was a relatively unknown at the time and one would think that it was a bit of a chance casting him in such a huge role.

Fred MacMurray was perfectly cast against type in Billy Wilder's 'Double Indemnity'. MacMurray played an insurance salesman who falls in love with a femme fatale and conspires to murder her husband and run off with her and the insurance money. MacMurray also appears in Wilder's 'The Apartment' and plays Jack Lemmon's boss, Sheldrake. Sheldrake uses Lemmon's apartment for romantic rendevous with his lover (not wife) played by Shirley MacLaine. Both roles play against the squeaky clean image that he later developed in 'My Three Sons' and Disney films like 'The Shaggy Dog'.

Casting is a funny thing as it's very hard to be able to imagine a finished film without its final cast. Imagine Tom Selleck as Indiana Jones (his audition is on the dvd). I'm sure 'Raiders of the Lost Ark' would have been just as entertaining but it certainly would have felt different. Imagine Harvey Keitel as Willard in 'Apocalypse Now', or 'Jaws' without Richard Dreyfuss. Apparently Francis Coppola had to fight for both Al Pacino and Marlon Brando for 'The Godfather', a move that seems like a no-brainer today.

Film is a collaborative medium and it is important to step back and look at how every decision you make can have a profound effect on the final picture. Choosing talent is that intangible element that can make or break a picture. This means the director, cinematographer, editor, costume designer, production designer, art director, writer etc... Each piece of the puzzle effects the final picture. There is enough ego in the industry that people want to believe in the theory of the 'Auteur' but I think you can't separate the director from the talent. A great director moulds the film but also knows to use the assets of talent.
Posted by Mark at 3:52 PM