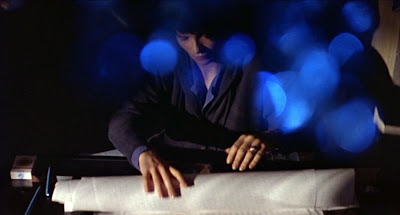 Three of my favourite filmmakers of all time are Francis Coppola, Anthony Minghella and Krzysztof Kieslowski. What unifies all three of these writer-directors is their understanding of theme as a major part of telling stories. Coppola transformed 'The Godfather' and 'Apocalypse Now' into masterpieces by focusing on thematic elements. Minghella's 'The Talented Mr. Ripley' and 'The English Patient' are superior not because of plot but of ideas. I love the quote from Ripley 'It's better to be a fake somebody than a real nobody'. That is the film, everything revolves around the idea.

Kieslowski created great films that revolved solely around theme. 'The Decalog' is ten films based on the ten commandments. 'Three Colours' was created out of the colours of the French flag; fraternity, equality and liberty. His films were designed from the theme and then made their way to plot and character.

I was reading Francis Coppola's forward to Mircea Eliade's novella 'Youth Without Youth' and thought it sums it up in another way.

"The subject matter of any film you choose to make is dou­bly important because the process of filmmaking is such a relentless, tedious, and difficult experience that you have to be sure the theme is something that will sustain your interest. No matter how tough things get, or how discour­aged you may feel, you have to be sure that morning after morning you'll wake up to a subject that still fascinates you. It should preferably be a subject you don't quite un­derstand, even better if it's based on a question you don't know the answer to. Then the making of the film, which ultimately winds through several years, can provide an answer, which will be the film itself."

Some of my students proposed Documentaries this year where they wanted to 'educate' the audience about this or that. I subscribe to Coppola's idea that we should want to educate ourselves. We should ask questions that we don't have answers to. I've often said that Michael Moore's documentary 'Bowling for Columbine' was extraordinary because he sought to answer the question of gun violence in America and when he was done he said he still didn't know the answer. They say art is about the process and the journey. I believe in this. Emerson said that 'A foolish consistency is the hobgoblin of little minds'. Theme pushes us to try to find answers to the unanswered questions.

In 'Hearts of Darkness: A filmmakers Apocalypse' Coppola says that he set out to make an Irwin Allen film. A great big action adventure film in the likes of 'The Towering Inferno' and 'The Poseidon Adventure'. He says that the thematic questions that came out about these four guys going up the river to kill the Colonel were ones he couldn't answer.

"It's a way we had over here for living with ourselves. We cut 'em in half with a machine gun and give 'em a Band-Aid. It was a lie. And the more I saw them, the more I hated lies."

"We train young men to drop fire on people, but their commanders won't allow them to write "fuck" on their airplanes because it's obscene."

"Charging a man with murder in this place was like handing out speeding tickets in the Indy 500. I took the mission. What the hell else was I gonna do?"

'Apocalypse Now' is about the contradictions of war. Kurtz thinks he's found the answer, if you are going to war then go to war. Kill without feeling and kill without morality. That is pure and everything else is a lie - there is no morality in an immoral act.

In the modern day it is about dropping 'daisy cutters' on the Taliban to shred them to pieces. If one combatant survives the attack we need to worry about their well-being and human rights... it's only human (despite the fact that we just tried to grind them up). 'Apocalypse Now' exposes the ridiculousness of it all. War is evil pure and simple. If you choose to wage in it then why create rules? It's a tough question. Willard puts down his weapon and walks away. The theme is dealt with by the individual and by the filmmaker. The theme is what makes the film a classic.
Posted by Mark at 3:59 PM

Coppola set out to make an Irwin Allen film? What a fortunate failure! Great stuff Mark, and thanks again. Dinner and drinks and music on the deck soon!