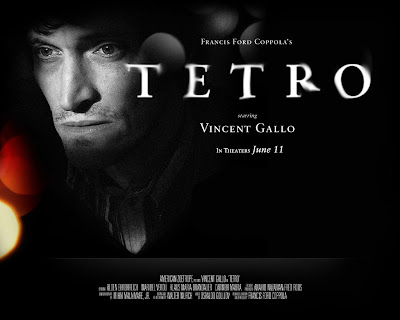 As you might know I'm a big Coppola fan. I am eagerly awaiting a trailer for his new film 'Tetro'. He has teamed up with Walter Murch once again and it's his first original sceenplay since 'The Conversation'.

The prolific blogger Mark Mayerson sent a link to an article on filmmakers in their 'magic hour'. It's great to see these great artists come back with such fresh material.

Part of my response to Mark:

Interesting to reflect on. I caught Billy Wilder's 'The Front Page' a few months ago and thought how out of place it seemed in 1974. It definitely felt like a throwback to a different time, out of step with the films of its day. I also watched 'A Passage to India' the other day and it too felt like it was of another time. I enjoyed the film more than 'The Front Page' but it does have a feeling of time warp in its style and approach especially when put up against contemporary films like 'Reds' and 'The Last Emperor".

Look at Welles reinventing himself with the unfinished 'Other Side of the Wind' and 'F for Fake' (which seemed to be about twenty years ahead of its time). Kurosawa is an interesting filmmaker as well. His films didn't veer in any modern direction (aside from Dreams) but seems to have been timeless all along.

Robert Altman took his leave with a wonderful picture, 'A Prairie Home Companion". I guess it's fitting that Altman left us with a picture about an old time radio show going extinct. Ironic.
Posted by Mark at 5:48 PM