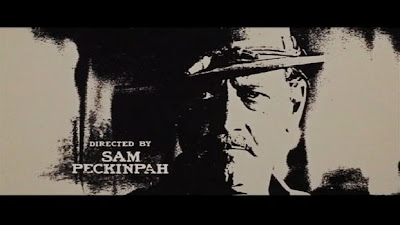 The reason to choose Peckinpah’s The Wild Bunch as a maverick film is obvious. To beat the wild horse metaphor, it moved away from the herd to revolutionize the Western into the seventies. It is telling that The Wild Bunch was out the same year as Wayne’s True Grit. One formulaic, predictable, and because of Wayne, iconic; the other a radical rethink of heroes and honourable behaviour in the West. (I think even Unforgiven owes a debt to The Wild Bunch.) Westerns were always morality plays. Good vs. evil. Black hats vs. white. But the Wild Bunch introduces the ambiguity of moral authority into the genre.

The movie begins with a group of children-a mixture of races and classes but the majority are town folks or representative of modern times- laughing at two trapped scorpions being overwhelmed by ants. This metaphor travels through the movie. The Bunch are being overwhelmed; caught up in forces of change they can’t escape. They looking for a way out. A last big score will set them up in Mexico but always eludes them.

In the opening gunfight, the Bunch is trapped in the town with no clean exit. They dive to and fro to escape like the scorpions. The slow motion violence got most of the attention at the time but it is the editing that really demonstrates the futility of their struggle. The whole sequence is a jumble of where they are, who’s shooting who, and the way Modernity-the bounty hunters, the citizens and especially the physical town- have hemmed them in.

The bounty hunters -Strother Martin and L.Q. Jones- are representations of how the West has changed. They are scavengers picking over the bodies of the people in the street and fighting over credit for kills. Their leader, Deke Slaiton (Robert Ryan) used to be a member of the Bunch, but was caught and turned. He shows his disgust with his new comrades in arms. “I gotta work with this!’ Again the theme of the passing of an honourable way to do things.

Like the theme of Peckinpah’s first film, the excellent Ride the High Country, the old moral codes of the West are being replaced by modern ways. There is no place for men to do what they were good at (fighting Indians, rustlers, etc.) The jobs of being moral authority by virtue of their character-their righteousness- rather than their station in society has gone. This is well demonstrated by Pike Bishop (William Holden.) Holden brings his legacy as a leading man to the role. He’s on the down side of his career as a matinee idol and visibly shows the weariness that his character feel. He’s tired of doing another robbery (movie) and is looking for a respite (real role) to go out on. He plays the moral outrage of what the world has become. (He does this again in Network later in the seventies.) Bishop and the Bunch are not heroes as in previous Westerns. They are bad guys doing bad things. They are honourable to each other and are betrayed by those who no longer can adhere to their moral code.

After the disaster of Major Dundee, the studios wouldn’t hire him and he spent four years without making a movie. With the Wild Bunch, Peckinpah stands up for what he sees in happening to the Western and filmmaking. He paints a picture of righteousness denied, frustration at the failure from the way things are going, and a decline in how things should be done . While he did do a number of good but flawed films after, The Wild Bunch is Peckinpah’s last big score.
Posted by Mark at 8:23 AM

All right, Mr.C...good to see those things that we talk about make it onto the page...

Good for people to know.