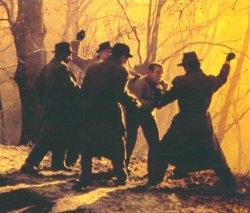 The move from VHS to DVD has been a true blessing for movie fans. Every movie company has reached into their vaults and have released so many of their treasures. Topping it off is the quality of the prints - the new telecines of old prints have given us a chance to see films in such high quality.

I make a regular trip to amazon and look up some films that are missing. One missing film is Bernardo Bertolucci's spectacular 'The Conformist'. If you don't know it, the story is set in facist Italy where the protagonist, Marcello Clerici takes on an assignment with the secret police to murder a political dissident in France. 'The Confomist' is one of those rare films that blends a unique visual style with a depth of themes and ideas. Storaro's brilliant cinematography uses colour and contrast of shadow and light to lift up and support the stories themes. Clerici is a shell, a man of no courage or conviction, a true conformist. The characterization is quite profound and interesting and Bertolucci explores it through politics and sexuality. Anthony Minghella's 'The Talented Mr. Ripley' is another great film that explores similar themes and ideas. The theme was encapsulated in that great line 'I'd rather be a fake somebody, then a real nobody'.

I read on IMDB that Paramount no longer holds the rights to 'The Conformist' so the release is up in limbo. I believe that Orson Welles 'Chimes at Midnight' is in the same holding pattern. It's a shame as these great films should be able to find a new audience. Maybe the Criterion Collection will be able to broker a deal as they did with Orson Welles 'Mr. Arkadin' and 'F for Fake'. Criterion has done a wonderful job with both of those films.
Posted by Mark at 10:09 AM