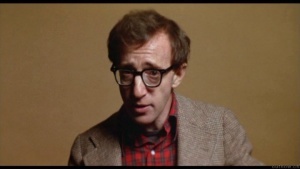 I screened "Annie Hall" again on the weekend. Sylvia hadn't seen it before so I jumped at the opportunity to watch it again. It's the kind of film that has grown on me with every viewing.

Woody Allen films tend to exist in a strange universe belonging to himself and his characters. The characters in his films are usually questionable in their behaviour and morals. In 'Hannah and Her Sisters' one sister has an affair with the other sisters husband. In 'Manhattan' Woody Allen's character is dating a teenager and takes up with the woman his best friends been having an affair with. In 'Crimes and Misdemeanors' one character pays to have his hysterical lover murdered. 'Crimes and Misdemeanors' is the most pointed of the previous examples in that it directly explores themes of religion and morality. By remaining in a sort of amoral universe Woody Allen allows himself to explore themes and ideas that other filmmakers rarely go to. Certainly mainstream Hollywood films tend to favour protagonists that are righteous and likeable. This is where Allen tends to split his audience. Some people give in to the fact that the characters are all 'flawed' while others need to connect with the characters and have trouble with the lack of morals and ethics. This is no more apparent than in 'Hannah and Her Sisters'. It's very hard to have empathy for someone who cheats on his wife with his wife's sister. And it's very hard to feel for a sister who cheats on her husband with the husband of her sister. At least it's very hard to feel for these people in a normal universe. In the worlds created by Allen these kinds of people can be met with some sympathy and understanding. But most of all, they exist so that we can look at the different facets of human nature and sexuality. Allen is the guide into areas that we don't need to go in our personal lives but can benefit from his insights and his humour. This is poignant escapism.

In terms of direction, Allen is distinct in American Cinema. There is never any doubt that you are watching a Woody Allen film. He uses terrific stage direction techniques and moulds them into cinematic techniques. Often he sets the camera up and allows his actors to flow though the spaces. 'Manhattan' is a terrific example of how he uses space as the camera is often a stationary voyeur. We become a fly on the wall in the drama. In Annie Hall he effortlessly plays with film form, creative editing and unconventional story techniques. He breaks out of conversations to address the audience directly. He cuts to flashbacks where he is present as both adult and child. He uses a split screen where the characters talk to one another through the split. Rarely do you see American films break time and space so freely. He hits the perfect tone and it doesn't ever feel contrived, or style for the sake of style. He pushes the boundaries even more a few years later with 'Stardust Memories' which seems to be heavily influenced by European filmmakers like Fellini. I stress the word 'influenced', not 'stolen'. Woody Allen is Woody Allen.

He has had a prolific career, that is for sure. There are only a few living filmmakers that come close to the amount of films Allen has made especially when you consider that he is writer and director and often the star. Some lament that his talents have waned over the past few years. Some question why he keeps going. I whole heartedly disagree with these detractors. Despite some misfires I respect his creative drive and can understand his desire to keep going. At some point he's not making films for us, he's making them for himself. And he should milk it as long as he can still get a budget.

I'd like to explore more 'time and space' ideas later but if you are interested in the technique you might check out Steven Soderbergh's 'The Limey' or Mike Nichol's 'The Graduate' for great examples. The dining room sequence in Citizen Kane is also a perfect example of breaking 'time'. Welles shoots an entire relationship from beginning to end in a single sitting at the dining room table! Brilliant.
Posted by Mark at 11:34 AM

You left out one important thing. Did Sylvia like it?

She's a terrific gal! She thought it was great.