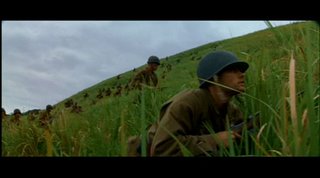 On the weekend I was catching up on some documentaries that I had pvr'd off the History Channel. They were World War I docs on the Sea Battle of Jutland, the Battle of Verdun and The Battle of Somme. It's surprising still the sheer numbers of human lives lost. Verdun alone numbered in the hundreds of thousands slaughtered and close to a million casualties. Afterwards I decided to view 'The Thin Red Line' again.

'The Thin Red Line' was the third film by Terrence Malick, a filmmaker known for his beautiful photography and lyrical drama. Almost all of the exteriors of his previous film 'Days of Heaven' were shot at magic hour. Magic hour is what happens to the light between sunset and when it gets dark. This happens for about a half an hour. To shoot all of your scenes at that pace is a cumbersome task to say the least. The end result, however, is an extraordinarily beautiful and lyrical visual.

'The Thin Red Line' stands out from most war films as it doesn't have that much interest in the war. Instead it focuses on the human condition and our place in nature and the world. It's a beautiful film and has a dream-like quality. Where 'Apocalypse Now' is psychedelic and trippy, 'The Thin Red Line' is lyrical and almost gentle. Nature is indifferent to the violence of war. Unlike the filth and destruction seen in 'Private Ryan' 'Thin Red Line' takes place in the tranquil beauty of the south pacific Island of Guadalcanal. In voice over the narrator speaks in philosophical tones. His questions are not about the nature of war but of the duality of man. Like 'Apocalypse Now' it sees that each of us are capable of great kindness and great darkness. There is always a struggle between darkness and light and it's in us as much as it's in nature.

"This great evil. Where's it come from? How'd it steal into the world? What seed, what root did it grow from? Who's doing this? Who's killing us? Robbing us of life and light. Mocking us with the sight of what we might have known. Does our ruin benefit the Earth? Does it help the grass to grow or the sun to shine?

Is this darkness in you, too?"

The last line echoes in the ending of 'Apocalypse Now' where Willard has the choice to go between the light and darkness. In 'The Thin Red Line' no one seems to be given the choice. They are pushed forward to sacrifice their lives to gain ground for the glory of their power hungry Colonel (Nick Nolte).

This is the kind of film that drives some people nuts and makes others take notice. I find it extremely evocative as it raises philosophical ideas but doesn't ever pretend to have answers. The atmosphere and visuals are of such beauty that they are in stark contrast to the war itself. In a strange way I find it quite soothing and meditative.

Very best site. Keep working. Will return in the near future.
»