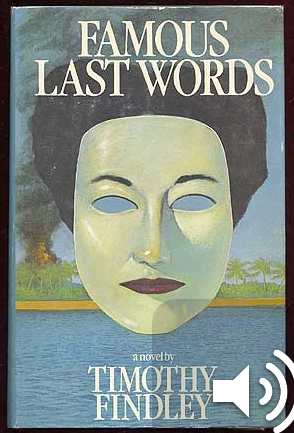 Around 6 years ago I edited a television show called 'The Writing Life'. It was a fairly easy show as we shot footage of 13 authors speaking to a group of novices and packaged it. Each writer would read from some of their own works and share some insights into the life of the writer. One such episode featured the late great Timothy Findley who came with a prepared piece that he proceeded to read. He was the toughest author to edit as he basically read this essay that went over our allotted time of 26 minutes. I had to find something to remove in a piece that was tightly prepared without damaging the integrity of the content and meaning. Needless to say, I proceeded with the care of a surgeon and dissected some time out to make it conform.

This terrific speech involved his novel 'Famous Last Words' and his own internal struggle with the famous poet Ezra Pound. Findley's main character in the book is named Mauberley and references Pound's poem 'Hugh Selwyn Mauberley'. Pound's poem is said to be somewhat autobiographical. For Findley, Ezra Pound was capable of creating such brilliance in his work but was in stark contrast to Pound's own personality and politics. Pound was a supporter and propagandist for Benito Mussolini and the fascist movement as well as an anti-Semite. How could so much hate produce such wonderful work? How can you reconcile your admiration and enjoyment of this man's talents with your dislike for the man and what he stood for?

After World War II Pound gave himself up to the American Forces and was sent back to America to stand trial for treason. Pound was never convicted as he was considered unfit for trial due to insanity.

Timothy Findley read a passage from Famous Last Words that has stuck with me since. It was such a beautiful passage from the book and I was compelled to look it up and share it here.

"And out of the corner of my eye I caught a glimpse of something irresistible above my head, seen in the ebb and flow of the swinging light: the imprint of a human hand.

God only knew how long ago it had been put there. Maybe ten - and maybe twenty thousand years before. This is my mark, it said, My mark that I was here. All I can tell you of my self and of my time and of the world in which I lived is in this signature: this hand print; mine.

Now the stars have disappeared. The grass is gone; the animals are calling to us out beyond this place - the frozen entrance to this cave.

In days or hours we will have died. We cannot breathe. The lanthorn flicks. All the air is gone. I leave you this: my hand as signature beside this images of what I knew. Look how my fingers spread to tell my name.

Some there are who never disappear. And I knew I was sitting at the heart of the human race - which is its will to say I am."

Findley spoke at my graduation ceremony when I graduated from my English Degree in 1995. He said that he felt that it was imagination that separated man from the animals. Our gift in life is our ability to 'imagine more' than ourselves. It's the age old question: would you rather be a fully contented pig or a half contented human? The answer is all yours. I'm sure Pound would have agreed with Findley... at least on that point.
Posted by Mark at 11:03 AM