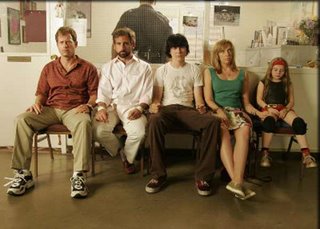 Yesterday Sylvia and I went to the theatre to see the wonderfully dysfunctional 'Little Miss Sunshine' and it was one of the best theatre experiences I've had in a long while and one that gave me some optimism for the future of projected films.

I decided not to write a review of the film so I'll just say that it was charming, funny, playful, well cast, well written and well directed. In other words, it's a delightful film.

As the theatre filled up I couldn't help but think of all the recent news of movie studios, fearful of the modern age of digital distribution and shrinking audiences. Despite these fears ticket sales are up seven percent from last year. We got to 'Little Miss Sunshine' about a half an hour early and proceeded to watch the theatre fill up. When the previews started people were struggling to find empty seats (other than those horrible seats at the bottom of the auditorium). Young and old came to see this little film (budget of 8 million according to imdb)and they weren't disappointed. It was one of the rare films I've been to where the audience clapped at the end!

As a casual observer it seems to me that people are just hungry for a great theatre experience. This means first and foremost, a great movie. The film opens with the big Dolby Digital logo, signaling the audio experience of the theatre, then follows with the theatre chains promo of 'Go Big', showing off the size of the screen. I love the 'Go Big' campaign as it is right on the edge of an anti-campaign. They won't finish the statement of 'Go Big or Go Home' - home is the last place they want you to go so they leave it off. You can advertise the theatre experience of big picture and big sound all you want but in the end it means nothing if the next hour and a half is a dud.

What a terrific experience it was with no cell phones ringing and nobody chatting. This is what a good film can do. It brings you into the story and holds your attention and engages you. We just need more of them - you shouldn't need a business degree to figure that out.
Posted by Mark at 9:49 AM