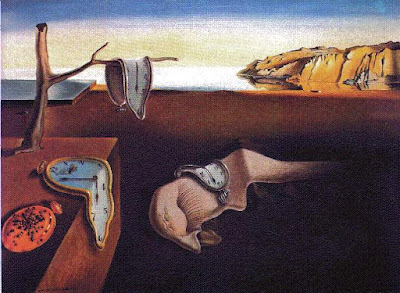 Compare the rhythms of Sergio Leone and, let's say, Michael Bay. Each filmmaker is using the pace of the film to achieve their goals. With Leone, long shots are used to draw out the tension. For Bay, it is trying to speed up the hearts of the audience for a more visceral effect. Look at Ridley Scott's 'Alien' and James Cameron's 'Aliens'. Both are exceptional films but both use time in a very different way. Scott employs longer shots and a slower pace to increase the tension and suspense where Cameron's film, although equally intense, employs a much faster pace. Both films work on the audience but in different ways. I always loved Ebert's review of 'Aliens':

The movie is so intense that it creates a problem for me as a reviewer: Do I praise its craftsmanship, or do I tell you it left me feeling wrung out and unhappy? It has been a week since I saw it, so the emotions have faded a little, leaving with me an appreciation of the movie's technical qualities. But when I walked out of the theater, there were knots in my stomach from the film's roller-coaster ride of violence. This is not the kind of movie where it means anything to say you "enjoyed" it.

Here is an excerpt from his review of Aliens:

One of the great strengths of "Alien" is its pacing. It takes its time. It waits. It allows silences (the majestic opening shots are underscored by Jerry Goldsmith with scarcely audible, far-off metallic chatterings). It suggests the enormity of the crew's discovery by building up to it with small steps: The interception of a signal (is it a warning or an SOS?). The descent to the extraterrestrial surface. The bitching by Brett and Parker, who are concerned only about collecting their shares. The masterstroke of the surface murk through which the crew members move, their helmet lights hardly penetrating the soup. The shadowy outline of the alien ship. The sight of the alien pilot, frozen in his command chair. The enormity of the discovery inside the ship ("It's full of ... leathery eggs ...").

I showed my students a Kieslowski masterclass found on the DVD extras of Blue. My students laughed while Kieslowski described having his assistant spending the day finding a sugar cube that would absorb coffee in five seconds. Juliette Binoche's character is running from her past and Kieslowski wanted to show that she has absorbed herself in unimportant details in order to move on without dealing with the death of her husband and daughter as well as her own talent as the composer of her husbands music (for which he is heralded). The sugar cube represents her attempt to forget and repress. For Kielsowski, three seconds wouldn't allow for enough time to create significance to the representation and eight seconds would be too long and would bore the audience. For him, a five second shot made it important enough for the audience to 'read' it but not significant enough to take the audience out of the film if it were longer. Although my students initially found this extreme level of detail entertaining, they soon found out how important time was when they made their first films. 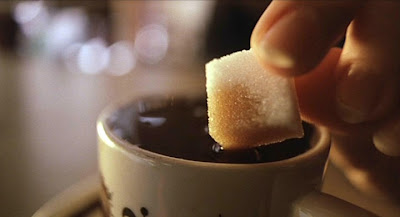 The aspect of time in the art of filmmaking is not only fun to experiment with but it seems that it does have a scientific base. Here is an excerpt from an article from Discover magazine:

Even in a healthy brain, time is elastic. Staring at an angry face for five seconds feels longer than staring at a neutral one. It may be no coincidence that the pulse-generating neurons are directly wired into regions of the brain that handle emotionally charged sights and sounds. And recent experiments by Amelia Hunt at Harvard University hint that we may actually backdate our mental time line every time we move our eyes.

This information is golden for filmmakers as it is one of the few arts that works in the realm of time. You can read the rest of the article here.

You can read the rest of Roger Ebert's reviews at www.rogerebert.com
Posted by Mark at 10:43 PM

Apropos of the pasage of time in film - albeit not quite in the same way you're discussing - I'm looking forward to the new film "The Curious Case Of Benjamin Button", starring Brad Pitt and the ethereal Tilda Swinton, about a character who begins his life as an old man and as time passes and as those around him age he grows younger.

Cinema is also the art where time can not only be captured (from Muybridge on) but also at varying speeds - Edgerton's high speed science films come to mind along with Peckinpah's use of slow motion. We've become so accustomed to playing with time and speed in cinema now, from the visual pyrotechnics of "bullet time" in "The Matrix" to the "bullet POV" in "Wanted" that it's actually become rare to be able to sit and watch a story or a scene unfold in "real time".

Mind you, it helps if something's happening and it's not just some lengthy shot of an actor staring at the sunset while the music saws away and we, the audience, are supposed to "feel" what the character is "feeling". You gotta get on with it. Show me. It's not like I've got all the time in the world.