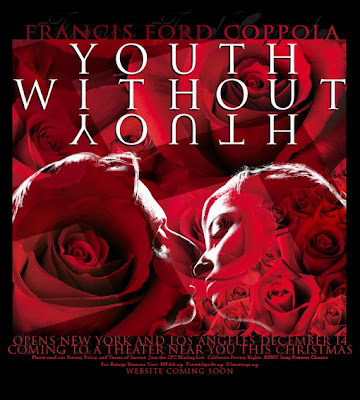 Francis Coppola recently released his first film since 1997's Grisham adaptation, "The Rainmaker". Coppola has been maligned by his critics for taking on films like 'The Rainmaker' and 'Jack'. Yes, 'The Rainmaker' wasn't the 'Godfather' or 'Apocalypse Now'. It was, however, a well-made, entertaining legal thriller and certainly the best of the Grisham adaptations. Like the great Orson Welles, Coppola was doing work for hire and planned to finance his most ambitious project to date, 'Megalopolis'. Apparently he had started pre-production on the film in 2001, shooting b-roll in New York City and scouting locations around North America. The attacks on the world trade centers in 2001 derailed his plans and made his reassess his script (for reasons I don't know but would love to read the script). For what I'm sure is many complicated reasons, he abandoned this epic project and changed his focus to adapting Mircea Eliade's novella 'Youth Without Youth'.

This new film seems to have stumped the critics and baffled audiences who are wanting a 'Godfather' calibre film. If you look at Coppola's career and personal ambitions you realize that he isn't enamored with the same projects that we are. 'The Godfather' was like 'The Rainmaker' in that it was work for hire. 'Apocalypse Now' was supposed to be an exciting war picture that he wanted to release to kick start his Zoetrope Studio. His true passion was for the smaller films like 'The Rain People' and the sublime film 'The Conversation'. 'Youth Without Youth' belongs with some of his most interesting and experimental films like 'One From the Heart', 'Tucker: The Man and His Dreams', 'Rumble Fish', and Faerie Tale Theatre's 'Rip Van Winkle'.

In my Screenwriting class I showed my students Charles Laughton's 'Night of the Hunter' and many were struck with the odd changes in tone and the unconventional story structure. The film had used some of the conventions of the Horror genre but Laughton subverted it to express his personal ideas. Altman did this all the time as did Orson Welles. Coppola, following in this tradition, has created an intriguing and original work that defies expectation and genre. It has the seriousness of a drama, a large dose of dense metaphysical philosophy (and theory) and an almost b-movie science fiction storyline. It's a film that demands that it's audience participate and play close attention as it provides clues and ideas and asks that you try to put it together.

The film involves a seventy year old professor of Linguistics who, near the end of his life, has failed to complete his life's work. He destroyed his loving relationship as a young man with his career ambitions and the love of his life married another man and, tragically, dies in an accident. The professor, Domenic (played by Tim Roth), is miserable and alone. He's failed at the two things that would bring him fulfillment. During a violent thunder storm, Domenic is struck by lightning and when he awakes he is under the care of Professor Stanciulescu (played by Bruno Ganz) and he has miraculously become young again. Not only has he become young, he has developed intellectual abilities beyond the comprehension of those who want to study him. It's 1938 and the war has just broken out and the fascist powers have developed a keen interest in his abilities. One of Hitler's top doctors has been developing technology that seeks to create Supermen using a similar technique to the powerful lightening strike.

Dominic has another secret that he doesn't reveal to Professor Stanciulescu - he has developed an alter ego. This alter ego represents his ambitions and his darker self. As the fascist plans for him begin to tighten, he has to choose how he will use these powers. Choosing neither good or evil, Domenic escapes to the neutrality of Switzerland and continues to seek the answer he is seeking. His ambitious life long work was to discover the origins of language. To trace the history of our consciousness to the very beginning of time. It's a foolish task for a normal man who doesn't have the time or intellectual faculties to achieve such an ambitious dream. Now, after the lightning strike, time is irrelevant and his magical abilities to gain and retain knowledge has given him the ultimate power of discovery.

In the third act of the film, it's the 1950's and Domenic meets Veronica, a beautiful young woman who is, as we suspect, the reincarnate of his former love. She too is struck by lightning (for which I wonder if he is responsible) and she too becomes a miraculous survivor and media sensation, speaking in ancient tongues. We slowly discover that she too is split but with a former self. Domenic uses her to channel ancient languages and progresses through the past. The knowledge is not gained without a price as Veronica starts to rapidly age and Dominic has to again choose between his ambition and his love.

If this all sounds a bit strange, it is. Coppola has made a personal film that walks the line of science fiction, romance, dreams and drama. The films themes partially remind me of 'The Conformist' and 'Apocalypse Now' and the idea of the duality of man. Our struggle between ambition and love, self interest and empathy. What is added is the idea that if we could trace our consciousness back to the origin of man we could discover God or creation. Dominic's alter ego wants to go forward, to discover the creation and to mutate again, creating a new race of atomic supermen. He believes that we need to destroy what we are to advance our species. But what does this ambition mean? This empty meta-physical quest that doesn't satisfy the soul of man.

I do disagree with much of the criticism of 'Youth Without Youth' and I applaud Coppola for his courage to attempt a film like this. Without a doubt, it is a difficult film and will require repeated viewings to unlock more of the puzzles. It's pace is deliberately slow and film is not always the best medium to discuss philosophy and have intellectual discourse. At the similar age of his protagonist at the beginning of the film, Coppola shows that there is plenty of creativity left in him and that he can still conjure the adventurousness of youth, toying with the ways film can express ideas. If only the audiences were as adventurous as the filmmaker.
Posted by Mark at 1:47 PM

There is some of us adventurous ones, great film!