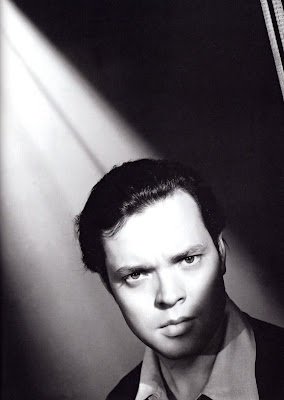 "The maverick may go his own way, but he doesn't think that it is the only way, or even claim that it is the best way... except maybe for himself. And don't imagine that this raggle-taggle gypsy-o is claiming to be free. It's just that some of the necessities to which I am a slave are different than yours."

'Citizen Kane' was the Albatross they hung around Orson Welles' neck. It was a work of such grand scale and vision that there was no way to live up to it. So much so that in 1971, the famous critic Pauline Kael tried to pin the artistic success of the film on the script's co-author Herman J. Mankiewicz. She wrote that Welles didn't contribute to the shooting script and tried to take credit away from Mankiewicz. Her essay, 'Raising Kane', was later refuted by Peter Bogdanovich but remains a good example of how much 'Citizen Kane' shadowed Welles his entire career.

Yet, for me, it is that tag of 'genius' that pushed Welles out of the studio system. The twenty four year old 'boy wonder' and 'genius' had gone out to California and was given a contract that was unheard of for any of the established journey-men filmmakers of the day. Complete control. Of course this caused a sharp hatred and jealousy of Welles in the film community and was compounded by the immense ego and combativeness of the young genius himself. When you get that big that fast, most people want to see you fail and fail miserably. With 'Kane', Welles proved himself to be a prodigious talent and it wasn't until his second picture, 'The Magnificent Ambersons' that he started his steep decline and eventual exile from Hollywood (or if I might paraphrase the motion picture itself - Georgey got his comeuppance).

Legend has it that the original cut of 'Ambersons' was indeed 'magnificent' but the studio made the blunder of doing an audience test screening and placing it after a bright and cheerful musical. Out of 125 comment cards 72 didn't appreciate the film. At over two hours running time, the audience felt it was too long (remember that they just sat through a musical) and some of the quotes were 'the worst picture I ever saw', 'people like to laff, not be bored to death', 'could not understand it, Too many plots', 'it stinks', 'rubbish' etc. On the other side of the fence the comments were 'this picture is magnificent', 'a masterpiece with perfect photography, setting and acting', 'I liked it but feel that it was above the audience', 'exceedingly good picture', 'I think it was the best picture I have ever seen' etc. It seems to echo a major problem/strength of any Orson Welles picture - it was too smart for the regular ball-cap Joe. He was an art-house filmmaker but was given such great resources and control and they eventually realized that he wasn't a commercially viable filmmaker. He was a personal filmmaker - an artist with artistic ambitions (whether or not he himself realized it).

Even Welles attempts at making commercial films turned out to be somewhat impossible. 'The Lady from Shanghai' is a terrific noir thriller but wasn't successful at the box office. Try as he might, Welles made the film with an odd story structure and some exremely memorable bravura filmmaking (the house of mirrors, the rendevous at the aquarium etc). In the 1950's he made his last studio-financed picture 'Touch of Evil'. Called 'the greatest b-movie ever made', Touch of Evil failed to get support from the studio and audiences. Ironically, Welles only financially successful movie was 'The Stranger' and it is his least enjoyable film. Not that 'The Stranger' is a bad film, it just follows a fairly paint-by-numbers approach that makes it easily digestible but also fairly forgettable.

Going into exile, Welles became one of the first great film Mavericks, financing his own productions through acting jobs and raising finances from independant sources. The great 'Othello' was shot over four years and released in 1952 to great critical acclaim. It won Best Picture at Cannes but failed to find success. This lead to several films made in europe: 'The Trial', 'Mr. Arkadin', 'Chimes at Midnight' and his experimental documentary 'F for Fake'. Of course none of these films made much money and the financing was so convoluted, many of these films were unavailable until recently. They have sorted out most of the rights issues and there are wonderful Criterion DVD's of 'F for Fake' and 'Mr. Arkadin'. 'Chimes at Midnight' is still very difficult to find and is considered one of his greatest films. This seems somewhat appropriate given the troubled and complicated history of Orson Welles.

It is a terrible shame that Welles had such a hard time getting his films made. He laments in the BBC documentary 'Orson Welles' that he probably would have been better to have stayed in Radio and Theatre. Film is ninety-eight percent hustle, he said, and two percent actually getting to do it. Yet Welles stands out in film history as one of the greatest of filmmakers. It is our lament that we only got to see him realize a small degree of his potential.